The first thing I did was to take it to the lake. I actually went through the manual couple times to ensure that truck can take water. The rubber tire serves as pontoons as the deep tread propels the truck forward. The truck made significant splash as it went full throttle all the time. The steering on water is eerily different from that on land, and much trickier since I had to compensate for oversteering constantly.

Then I tested the truck over the pebbles while it’s still dripping water. The tires were particularly slippery when wet and lost traction frequently. But it found its comfort zone once on grass or soil, on which it conquered bumps and little rocks relentlessly. I also tested its crawling, and as I had expected, it kept losing traction due to lack of fine control.

There used to be a time when the market of big RC trucks was dominated by brands such as Traxxas, Team Losi, HPI and the likes. Yet now big scale is no longer an exclusive saved for the hobby-grade RC models. More toy producers offer their alternatives that function in similar way. And they created joy similar to the big block trucks, without clearing your wallet. Yet cheap price does not necessarily mean a compromise in quality. This could easily be one of the RC monster trucks for kids and beginners. To be specific, this could be one of the star products in the RC crawler store.

INTEY has been a major competitor on the RC toy truck market for quite some time. This amphibious RC monster truck is one of its latest and best to hit the market. The amphibious part really grabbed my attention. Because I struggle to find any RC truck that can tread literally over any terrain, including water. Now the search is finally over.

At the scale of 1:12 this is probably one of the largest RC toy trucks that I have ever reviewed. Big size promises great ease and passibility with which the truck conquer the bumps. 4wd transmission boosts both handling and driving force on land and water alike.

So what’s this truck is all about?

The truck is like a cross between monster truck and crawler. It is faster (I’ll come to it later) than most of the toy crawlers on the market. It also maintains the flexible, spider-like stance and high clearance that make it ready conquer the impossible barriers. Tire’s tread pattern is quite simple and reminds me of the early monster truck tires. The tires are also harder than the sticky crawler tires with great grip. But I didn’t expect it to be a fully-functional crawler in the first place, the amphibious function was more attractive.

Let’s now come to the waterproof feature. INTEY claims IP6 waterproof, though it’s not clear if that refers to IP67 or IP68 (IP68 is a higher rating for waterproof). Either way, the truck can run over water without short-circuiting its electronics according to INTEY, and we tested its water run later to see if this is indeed one of the best monster trucks kids and beginners.

The battery compartment, which is sealed by a rubber ring, sits at the belly of the chassis and can be accessed after the lock buckle is disengaged. The stock 7.2V battery pack holds enough juice for a 10 minutes run (or less, because the truck always goes full throttle as it’s not proportionally controlled) and takes around 1 hour to fully charge. As I had repeated numerously in the past, do not plug the stock USB charger in your computer as it will damage the motherboard.

The remote control requires a 9V battery which is also included in the pack. The biggest complain here is the lack of proportional control and any fine control. But still at this price I didn’t expect it to function the same with hobby-grade monster truck or crawler. But that said, this is one of the best remote control monster trucks kids and beginners.

INTEY kindly put spare gears in the package, a gesture rarely offered by other toy producers. 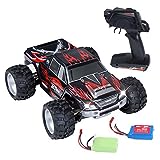 www.rccarclub.com is a participant in the Amazon Services LLC Associates Program.